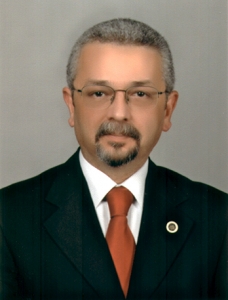 Prof. Selim O. SELAM was born in Kassel/Germany, in 1962. He completed his BSc degree at Ankara University, Faculty of Science, Department of Astronomy and Space Sciences in 1985 February. He started to work as a research assistant at the same department in 1986. He took his MSc degree in 1990 and PhD degree in 1998 from Astronomy and Space Sciences Department of the Graduate School of Natural and Applied Sciences at Ankara University. In 2001, he has studied as a NATO-B2 postdoctoral fellow at School of Physics and Astronomy in Nottingham University. He became an assistant professor in 2001, associated professor in 2005 and a full professor in 2011 at Ankara University. He actively joined to the site testing and establishment works of the TÜBİTAK Turkish National Observatory (TUG) and served as a technical consultant. He gave important contributions to re-establishment works of the Ankara University Kreiken Observatory. He received the “Research and Encouragement Award” of METU Mustafa Parlar Education and Research Foundation in 1991, the “Best PhD Thesis Award in Science and Engeenering” of Fulbright Association in 1999, and “Astronomy Science Award” of Istanbul University (in the name of Prof. Nüzhet Gökdoğan) in 2008. He has performed several administrational duties in various times at the university (department head, observatory director, faculty board member, senate member). He continued his research works on “Light and Period Changes of Close Binary Stars” and “Extrasolar Planets”. He is married and have a son.